Birya United Agencies was registered and commenced business in November of 2003 with a share capital of 2,000,000 (two million) ugsh. In the 15 years of its existence Birya United Agencies has been supplying and trading in agricultural and industrial items. Its main focus being on Maize flour, milled rice, dry beans, sugar, fire wood, cooking oil, vegetables and other agricultural and processed items. 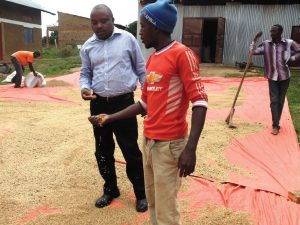 To date Birya United Agencies has acquired a wide range of reputable clients including the Ministry of Defense, Uganda Police, Prisons, Mbarara University, Ntare School and others. The company has 14(fourteen) permanent staff of which 6(six) are female with scores of casuals.

Asked about the Top 100 Mid-Sized Companies Survey 2017 in which Birya United Agencies participated, the Managing Director said, ‘this was a great motivator to our team as it showed we can improve and achieve greater tasks ahead. Our performance improved from the 57th position in the 2016 Top 100 Survey to 7th in the 2017 edition of the Top 100 Mid-Sized companies Survey’.

Mr. Rutebemberwa further pointed out three major achievements of participating in the Top 100 SME survey as the recognition of Birya United Agencies as a company with growth potential. This gave the staff a sense of pride and has motivated them to keep improving. He also pointed to the vast networking opportunities with a wide range of business leaders that were presented by the event. Also learning about the myriad of investment opportunities in the country from UIA was another major achievement.

He decried the challenges SMEs like Birya United Agencies face with commercial bank lending rates and suggested the Government consider fixing commercial lending rates at 15% p.a. He mentioned the price fluctuations due to seasonal changes and suggested that Government roles out a plan for irrigation in the country as a way to stabilize produce prices. Then the over 200 (two hundred) debtor days government suppliers have to endure to get paid as a major challenge on SMEs. He suggests that Government would do well to stick with a quarterly release of funds and maintain budget discipline.

On working with Private Equity and Venture Capital firms to access cheaper capital, he was quite receptive of the idea considering that this source of funds would be cheaper than commercial loans. He also agrees that the Private equity and venture capital firms bring on board much needed expertise that would improve the business.

He envisages a Birya United Agencies that will be exporting grain and other processed goods to the East African region and beyond in the next five to ten years and employ more than double the current number of employees.